If you’re in the market for a relatively simple dual-probe thermometer, ThermoPro’s TP20 model might be right for you. Its intuitive design and durability make it one of the most popular thermometers in the world of smoking and grilling, and it sits at the #1 spot in our roundup of the best smoker thermometers.

In this ThermoPro TP20 review, I’ll share my thoughts on the thermometer, which I’ve been using consistently for the past several months. I’ve tried to avoid just listing features/specs and instead talk about how this thermometer meets my needs as a (borderline obsessed) home BBQ enthusiast. I hope you’ll enjoy!

What You'll Get in the Box If you purchase a ThermoPro TP20, here’s what you’ll find when you open the box:

I also received a 10% off coupon, as well as a little card ensuring that I was happy and telling me how to get support. I can’t guarantee that those will be in your box, since they aren’t listed as contents on ThermoPro’s official site.

Quick Overview of How it Works The photo directly above shows a pretty typical setup for smoking meat. Specifically, this was for brisket.

On the right is the transmitter, where you plug in the probes. It has one button that turns it on/off and allows you to switch between Fahrenheit and Celsius. The display continually switches back and forth between the two probe temperatures.

The large numbers on the receiver (left) give the readings of the two probes. Probe #1 displays the smoker’s temperature (257° F), and probe #2 is the meat’s internal temperature (49° F).

With regards to the technology behind the communication, RF signals are used. This is not a Bluetooth or WiFi device, so it won’t talk to your phone.

The TP20 comes with a 1-year warranty, but you can extend it to 3 years if you register your device with ThermoPro online. Also, as their site outlines, they have a “stress free” policy when it comes to replacements. You don’t have to send anything back for repairs – instead, they will just send a new unit or probe(s) out.

It’s also worth noting that they provide customer service via email, phone, or online chat five days a week.

While the TP20 is great on its own, there are a couple accessories worth mentioning. The main thing you might consider is a case to keep the various components together. ThermoPro sells a hard carrying case that fits the TP20, and there are also similar third party cases, like this one by Caseling. 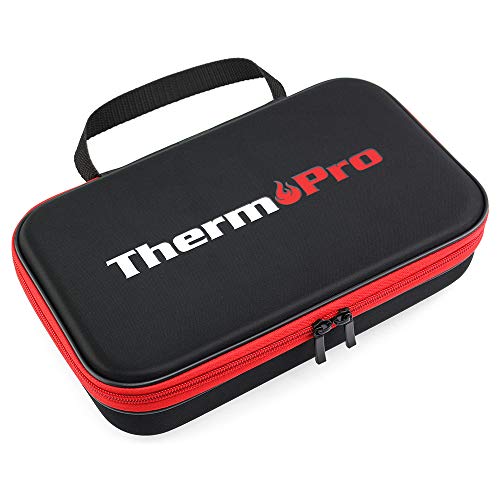 You should also think about getting extra probe holder clips, which fit between grill grates (or in oven racks). These are easy to misplace, and since you have to pinch them to move them, they get bent out of shape over time.

While buyer reviews for the TP20 are overwhelmingly positive, the complaints that do exist usually focus on the probes. Specifically, some folks find that they give incorrect readings or stop working completely over time. Luckily, ThermoPro appears to be committed to honoring their warranty and replacing probes.

Personally, I haven’t had any problems with the two original probes. They have darkened over time from several smokey cooks, but still work like new. With that being said, I’m careful not to put the probes or wires over direct flames, and I’ve never submerged them in water (or left them out in the rain).

A second potential negative is the lack of “smart” device features. As mentioned earlier, there is no Bluetooth capability. This thermometer isn’t going to talk to your phone via an app (or through any other method). I personally don’t have any desire for additional high-tech features, but if you do, check out Weber’s iGrill, which allows you to check temps through an app on your phone.

I haven’t actually handled the TP08, so I decided to email ThermoPro and ask about the main differences between the TP20 and TP08. They got back to me within a day and let me know about a few differences.

First, they mentioned that the TP20 is the “upgraded” version of the TP08. The TP20 has more preset meat options. Additionally, the TP20 has a more intuitive design. If you look at the comparison photo above, you can see that the TP20 (left) shows the preset option at the top, which the TP08 does not. The TP20 also has the target temperatures to the left of the current probe temperatures. 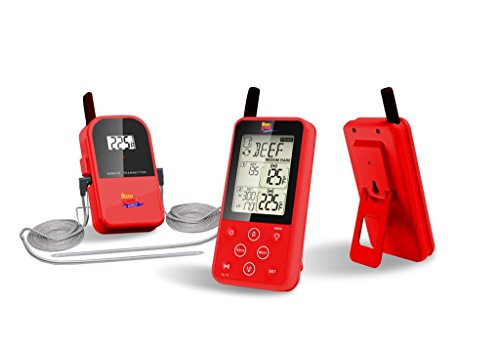 First off, it should be said that the ThermoPro TP20 and the Maverick ET-733 are quite similar in that they are both wireless, dual-probe thermometers. Additionally, they both have roughly the same receiver/transmitter setup, and both have built-in presets for different kind of meats.

So what’s the difference between the ThermoPro TP20 and the Maverick ET-733? It mainly comes down to ease of use, with the TP20 being easier to use. The Maverick sometimes has issues syncing, and you have to use the “re-sync” button to get the transmitter and receiver on the same page. With the TP20, syncing is always automatic. Additionally, the TP20’s design is easier to navigate, with the ET-733’s menu system being more cumbersome and requiring more button presses to get set up.

I hope this ThermoPro TP20 review has been helpful. I love the intuitive, straightforward design of this model, and so far I have no complaints about accuracy or reliability. I can also rest easy knowing I have a 3-year warranty, and ThermoPro is known for responsive customer service. If you’re interested in learning more about the TP20, check it out on Amazon. And if there’s anything I missed, feel free to ask me a question in the comments below! Hi, and thanks for being here! My name is Tim, and here on BBQ Smarts I want to teach you everything I know about barbecue and grilling. Click here to learn more about me.

BBQ Smarts is a participant in the Amazon Services LLC Associates Program, an affiliate advertising program designed to provide a means for sites to earn advertising fees by advertising and linking to Amazon.com.